Despite the tens of thousands of whale-watch hours each season, as well as the presence of multiple researchers for over thirty years, a birth has not been documented. At the same time, the following evidence support the assumption that humpbacks do give birth during the migration and winter months in Hawaii: 1. Studies from whaling operations clearly show that term fetuses and birth coincide in winter months; 2. In Hawaii, observations of tiny calves with folded dorsal fins and crease marks (clearly within days if not hours of birth) are common; 3. A humpback whale placenta was found in Hawaii shortly after a very young calf appeared beside an adult; 4. One study reported the sighting of a photo-identified female without a calf on January 31 (1981) and with a calf seventeen days later on February 16 (1981), indicating a birth had occurred.

Since the birth of a humpback whale has not been documented, the specific behavior patterns of the mother immediately before, during and after birth are not known. It is likely that the mother’s behavior is geared towards rest, nursing and protection of the young. The last of these tasks may have three fronts: 1. Avoiding, or at least controlling, interactions with sexually active males; 2. Avoiding interactions with other mothers with a calf and; 3. Guarding against potential predators. These three goals may account for much of the behavior of mother/calf pairs such as their frequent travel and their tendency to stick to the shallow, inshore waters, ostensibly to avoid harassment from males and predators.

Despite our limited knowledge, it is obvious that the bond between mother and calf is a close one. Calves rely on their mothers for food and protection and are rarely seen far away from them. They accompany their mothers across the North Pacific to distant feeding grounds and it is not until a year after their birth, either on their migration back to the breeding grounds or once arrived, that the maternal bond is broken between the mother and now juvenile whale.

August 15th was a night to remember for those attending Whale Trust’s sold-out summer benefit at Lumeria Maui. With musical performances by Sierra Carrère, Grammy-winner John Cruz, and special guest Mick Fleetwood – great fun was had by all!

Over 50 local businesses and artists contributed to this special evening that helped raise nearly $30,000 for Whale Trust’s research and education programs.

Special thanks to Lumeria Maui, Fleetwood’s on Front Street, John Cruz, Sierra Carrère and all of our many sponsors, guests, and dedicated volunteers. 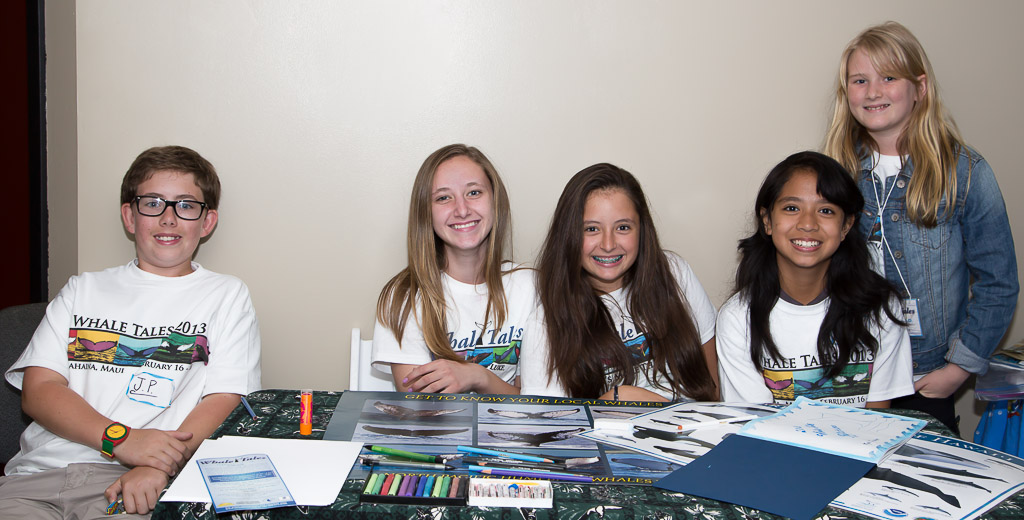 Wanting to find a way to participate in a meaningful way, the students designed and created a reflection book on the event. Inspired by their drawings and enthusiasm, hundreds of attendees, volunteers and presenters joined in on the fun and jotted down their reflections and drew sketches about their experience at Whale Tales 2013.

The final result was fantastic for everyone! We can’t wait to see what they come up with for Whale Tales 2014!

In 2009, Whale Trust Maui initiated a collaborative arts and education project to help connect two elementary schools in Hawaii and Alaska through humpback whales. Students participating in the project spent five months researching humpback whales, listening to speakers from the scientific community, writing stories, journaling about what they learned and writing and producing plays and DVD’s of their work (see below).

They also created a traveling artistic mural of their journey (above).